Volunteering During the Covid-19 Pandemic: What an oral surgeon can do – Dr. Stuart Lieblich

As an oral and maxillofacial surgeon in private practice I’ve also had the opportunity to participate in volunteer mission trips as well as teach in residency programs. In addition to my private practice and involvement with the residents at UConn I also volunteer at a New York City OMS program 2 days a month (Cornell). When the COVID crisis hit of course our practice changed to just treating emergencies requiring me to be there only once every 3 days as my 2 other partners and I shared this responsibility. The elective surgery at the NYC program also soon stopped leaving me with too much free time. 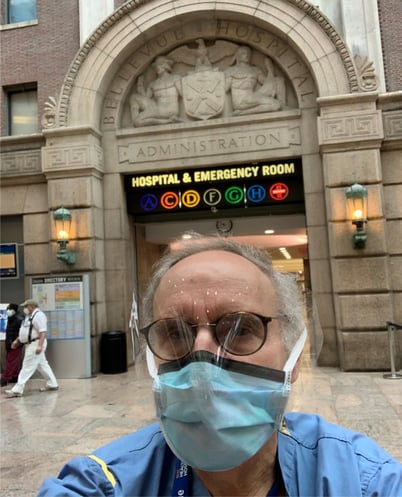 Being in New York City during the early phases of the pandemic I felt as many did, very powerless and with an urge to help. At the end of March, New York City put out a call for health care volunteers to aide at what was becoming an obvious need in their health care system. Specifically, I noted a request from the Health and Hospital Corporation of New York (HHC) that manages the 11 city run hospitals. Having trained at one (Kings County) and seeing the overwhelming need each night of overworked health care workers on the news I filled out the online form for volunteers.

One week later I was contacted by phone and had a good discussion about their needs and what an OMS can do. The administrator was immediately receptive especially in regard to our experience with airway management, provision of anesthesia, and intravenous lines and noted my credentials. Shortly afterwards I received an email notice that I would be assigned to Bellevue Hospital’s anesthesia department and given a list of tasks to complete in 5 days: EMR Epic training (3 hour webinar), credentialing forms, and various required online courses (HIPPA, sexual harassment, fire safety, PPE use, etc.).

Following completion, I was given “disaster credentials” as an emergency attending. An onboarding orientation was scheduled for that week with other volunteers, and then I was assigned to the anesthesia department. Our group was designated to be “unit anesthesiologists on call”. We were assigned to various units in the hospital in teams of 2, usually an attending and a CRNA.

Assignments were in 12-hour shifts, 7am/7pm or 7pm/7am; 2 of us to a unit. My initial assignments were on the 17th floor. Like most repurposed areas of the hospital this was an ambulatory surgical unit that had been converted into a step-down unit. Our typical patient had been hospitalized over 7 days, had severe respiratory insufficiency and required high flows of oxygen like I’ve never seen before (30L nasal high flow cannulas combined with non-rebreather masks, CPAP at 40L with 20 of PEEP). In spite of that many were just able to keep their saturations around 90% but you could see their work of breathing to be so hard as well. To take off their masks to sip water caused immediate desaturation.

Our responsibilities included IV line starts, which was complicated by patients having had so many IV’s, and blood draws including ABG’s. I did learn how to perform ultrasound guided IV’s and phlebotomy from my anesthesia colleagues (it’s like triangulating for arthroscopy). Following the progression of COVID-19 was amazing especially in regard to the coagulopathies. Seeing D-Dimers’ go up to 2,900 was indicative of the progression in many patients often preceding acute respiratory failure. Clinical trials were ongoing in these severely ill patients with Remdesivir and Tocilizumab, which required additional blood draws as well.

As to be expected, many of the patients would desaturate setting off the alarms. Being on the unit we often could reposition the airway adjuncts, position the patient (proning) and stabilize the patient. However, many started to fail requiring urgent airway maneuvers particularly intubation. There was a separate anesthesia team that came to intubate but our responsibility was to be there first to intervene with bag-valve-mask ventilation and then assist the intubating team. We also provided the medical information on each patient and reviewed their resuscitation requests that were on file. Their poor oxygen reserve too often led to cardiac arrest so I ended up being involved with many full cardiac arrest codes as well. 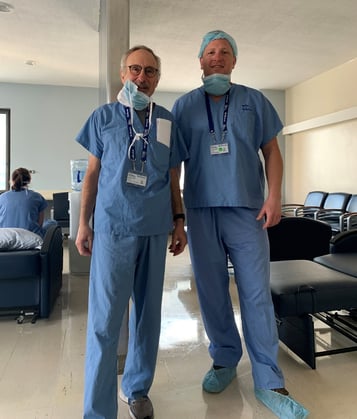 Our commitments were to be at least 5 shifts, I completed 10 before the crisis stabilized. My last shift was early May; but I could sense already the few days before that things were getting quieter. The number of RRT (Rapid Response Team) calls were decreasing and the number of times happy music played over the hospital PA system (for a discharge) was increasing. Still they had a lot of sick patients, but things were so much better.

Overall, it was a lasting experience for me and as anyone who has gone on a mission trip or been part of crisis an experience that I will always remember. You do meet wonderful people and develop relationships that I’m sure will continue. I kept track after a few days and noted I’d been involved in 11 acute respiratory events; 4 full codes in which I rotated giving CPR and managing the AED along with starting many IV’s and numerous ABG and blood draws. Placing and administering medications via the intraosseous route (I/O) was also something I had practiced in simulation but never clinically performed. All skills that will continue to help me provide care when our practice gets back to elective procedures again. It also reinforced my belief that simulation provides us clinical skill base that we can use in crisis situations. Although once the RRT team arrived I was not a “code leader” but during the debriefs that occurred afterwards my actions were noted to have been positive ones and I felt I had contributed.

We all hope that the pandemic gets under control and that a second wave does not occur. Should that happen though I’d encourage my fellow dentists and OMS’s to volunteer either at an epicenter or even locally. There is no doubt that we have a lot to offer and can be integral assets during times of crisis. And continue to train even if its just simulation training; it does translate effectively during an acute crisis.