I recall back in February and early March of 2020 having discussions with patients about this new virus originating in China.

We generally concluded that this was yet another instance of the news media taking a significant story and blowing it all out of proportion to gain viewers or readers. We recalled that the news could never manage to refer to the “bird flu” as just that. It had to be referred to as the “deadly bird flu”. Deadly? None of us knew anyone that had died from the “deadly” bird flu. Should this new virus be taken seriously?

The second week of March my wife and I made a long-planned trip with another couple to Bonaire, Dutch Caribbean. On the way down the only differences we saw at our Nashville airport and during our Atlanta layover were a very few travelers using face masks and the obvious presence of hand sanitizer dispensers. On board the plane most people were being diligent about wiping down arm rests, tray tables, and seat belt buckles with disinfecting wipes, too. There were numerous empty seats on both legs of the trip, we later found out, due to people cancelling flights so they could stay put in the U.S.
It was a great trip. Just like all the other trips we had made there. Good food, good scenery, great scuba diving, and lots of relaxation.

While we were down there, we exchanged some email with our office team about usual dental office issues. They happened to casually mention that the fear of the virus had caused store shelves to be stripped of paper goods, especially toilet paper. How bizarre that seemed!

The Saturday before our Sunday return to the U.S. by air was the last day Bonaire allowed cruise ships into their port. (The weekend after that all airline flights were halted.)
On our return, there was the ritual of wiping down surfaces at your seat on the plane again but there were no empty seats as people were scrambling to get back home. Many more travelers were wearing masks this time. The waitress at the Atlanta airport restaurant that served us during our layover was filled with anxiety that her job was going to disappear. A tough thing for a single mother! The fellow that shuttled us from the airport to our car at his “park and fly” business pointed out how empty their parking lot was. The virus had killed their business.

We were able to work one day before the virus shut us down. It was St. Patrick’s Day. A Tuesday. We had spent the day before getting the office ready to see patients, putting extra precautions in place. That morning I was getting email information from our Tennessee Dental Association and the ADA. The ADA was putting emphasis on shutting down. The TDA was emphasizing taking extra precautions to protect patients and staff. By lunch both the TDA and ADA were on the same page, though, and that evening we began what would turn out to be a 7-week shutdown.

But initially we did not know how long the shutdown would be. Worst case speculation had us closed ‘till the fall. Several times during the seven weeks it was call patients, reschedule patients and repeat. In early April we began the process of obtaining a PPP loan.

Finally, in early May, we were able to see patients again. Most were glad to see us. Those that came to see us remarked on how comfortable they felt with the precautions we were taking and that our office was the “cleanest” place they had been, including medical offices, since the pandemic began. Some stayed away because they were not going outside their homes for any reason. There were a few medically compromised patients that we told to stay away; that we would see later as the virus and its transmission and behavior became better understood.

For four months we were able to work continually, but at a slower pace than before, taking care to keep patients separated and alternating rooms to allow time for filtration of the air and thorough disinfection of surfaces. 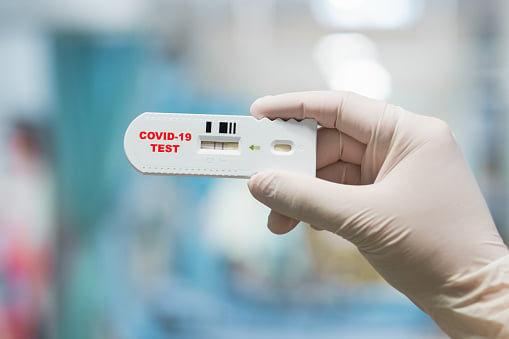 Then COVID-19 got personal. At the end of August, I developed stomach pains, then diarrhea followed by violent vomiting. My ears hurt and I had a pulsatile tinnitus. My ribs ached as if I had broken them. Knowing COVID-19 could manifest itself as G.I. symptoms, I went the next day and got a nasal swab which came back positive the next day.

So, 10 days of quarantine began. Though I felt better the first few days after the vomiting; brain fog, dizziness, emotional volatility, headaches and insomnia crept into the picture. It was a peculiar thing. I could feel great for hours and then terrible. My neurologist said the way the symptoms would come and go, they were a lot like “post-concussion syndrome.”
I suppose the good in all this was that I had begun, weeks before my bout, to negotiate the sale of my practice. Though I would have liked to have continued another 2-4 years, the virus and its complications had convinced me that it was time to go. Then when I had my own personal relationship with the virus, it was the icing on the cake and confirmation that this was no game I wanted to continue playing, for my sake and that of my patients.

So here I am, two and a half months after my COVID-19 attack and one and a half months after the sale of my practice. My mind has cleared, there is no dizziness. The tinnitus stays in the background almost always and is not an issue. An MRI shows that I have a perfectly healthy-looking brain. I am still emotionally fragile though, prone to spells of near crippling anxiety and depression. I have doubts – Should I have stuck with the practice and hung in there for a couple of more years? I would certainly have more money in my retirement fund. I’ll be volunteering at my local Interfaith Clinic before long, but I sure do miss my own patients. Folks that I have known for decades. But here comes a second wave of COVID.