Dentists to the stars or celebrities often have odd but useful technical and patient management related case reports for their colleagues. Well, their ain’t nothing that compares to the weird cases I’ve had with the superhero crew.

It all started when this playboy, Bruce Wayne, came to my office with a chipped central incisor. All I did is ask how he did it and he unloads on me about his childhood, that he really has no girlfriends, lives alone in his mansion with an old butler but is trying to save the world as the Batman. And is really upset that all his protective gear and clever gizmos don’t protect his teeth. In fact, with modern technology is worried that some joker might identify his secret identity by his teeth. Holy HIPAA I thought.

Well after I did a super job bonding his incisor, I found myself that night in the Bat Cave making a pair of mouth guards with some of the high-tech materials he stocked down there. Understand this guy has no superpowers. Just incredible athleticism and gadgets to save us all. 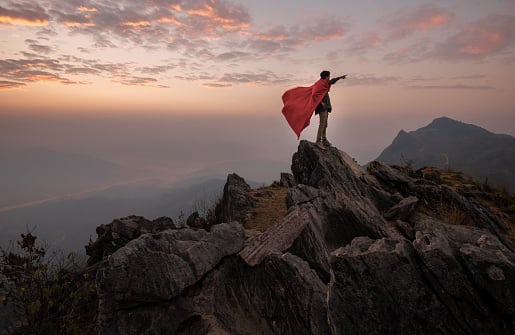 He must have been happy because a few months later his friend, a mild-mannered reporter, comes in with acute sensitivity in all his lower molars. He too starts telling me about his childhood, trouble with girls, lives alone but he is trying to save the universe. Yep, he wasn’t a reporter or a bird or a plane. Now unlike Bruce, Superman does have superpowers, and is invulnerable, so what’s the problem with his teeth I’m thinking. Well it seems he had a dust up on the far side of the moon with some thugs from Andromeda who had some Kryptonite.

An hour or so under Niagara Falls got rid of most of the Kryptonite dust. But it seems that people from Krypton genetically have some buccal pit deficiencies on their lower molars. No problem unless a Kryptonite dust particle or two get caught in them. So here I am with this guy sweating and tearing up in my dental chair, a guy who can toss the earth to the other side of the galaxy. Understand I couldn’t give him a local anesthetic injection. The needle would break. Anyway, I did another super job cleaning those Kryptonite suckers from his buccal pits.

This superhero crew must socialize a lot because the next week Bruce Banner wanders in. He unloads about his childhood and life on the road running from a bunch of government and corporate types. And again, another lonely guy who can’t seem to keep a girlfriend. Anyway, whenever his blood pressure and pulse goes up too high he becomes the Incredible Hulk. His teeth go through some weird biological thing and expand, popping out his half dozen fillings. He says he is thrilled to find a super dentist to replace them because in a busy year it could happen a dozen times. Well, have no doubt, for this guy I was watching the blood pressure cuff and pulse meter. All I need is trying to tell everyone from the police to the insurance company how half the side of my building got torn off because my green giant patient had a hissy fit.

The next character was Spiderman. You know he is just a high school kid. And another guy talking about his childhood and problems with girls. Like most Millennials he has great teeth. Just comes in for recalls. A little squirmy even for a cleaning. So once or twice he got stuck in the chair from that sticky spider stuff. It came off the chair alright with that Mr. Clean magic eraser.

I’ve had about a dozen or so of the other super dudes. But I should mention some of the practice and patient management aspects with these guys. First, none of them can balance a check book.

Bruce Wayne inherited all his big bucks. The night I went to the Bat Cave I explained I would have to charge him extra and noticed if I had charged him ten times the amount he’d be clueless. And Clark Kent! He bounced a check. Still have it. Works for almost nothing for the fake news #Daily Planet. But you’d think flying around saving the universe he could make something on the side. Bruce Banner the same thing. He has a running balance that I doubt I will ever collect. Don’t tell me to get tough either with a guy who if his pulse increases turns into the Hulk. Peter Spiderman is also clueless. But his old aunt makes my day. She calls and makes his appointments and always sends a check with some of her homemade cookies. I cut the fee in half because of her.

But nevertheless, me and the guys are bros. And friends can do a few favors for each other and share their troubles. I mean once Clark with his x-ray vision and super breath found and cleared a sewer blockage outside the building that the city couldn’t get right for years. And thanks to Bruce Wayne and Peter, on my side of town the crime rate is down 70%.

I have to say the female superheroes are not the head trips the guys are. Take Supergirl and Catwoman compared to Superman and Batman. No complaints about childhood, dating. Always upbeat. Balanced lives and checkbooks. And no saving the world or universe complexes. They have a great local program finding lost dogs and kitty cats. Down to the earth you might say.

I get along best with Wonder Woman. Wiser and more mature then all the male superheroes called the Justice League put together. None of those guys can even get the day or time of an appointment right.

I used to get down with all the stresses of a dental practice and thinking I was nerdy. But Wonder Woman nicely assured me that saving a few teeth a day is just as hard and tough as being a superhero. In fact, she told me to forget the superhero bull. The real heroes are out there on the streets in their homes and workplaces everyday breaking their rears making a living and doing the real world saving. So, from that day on I realized I was not a bird or a plane or a superhero. Just one nonnerdy dentist saving a few teeth a day.

Times like these perhaps something completely different is appropriate to lighten the mood.
I am in general practice since 1975. My dental office is located in South Amboy, NJ