If you would have told me a year ago that I would be placing a swab 3-4 inches into someone’s nasal passage to reach the nasopharynx, I would have told them they were crazy. In early April, many members of the 155th Air National Guard Medical Group based in Lincoln, Nebraska raised their hands and volunteered to help. Many of us as traditional National Guard were not currently working in our civilian practices or attending university because of the shutdown, so nurses, dentists, optometrists, med and dental techs, admin, and public health members were placed first on state active duty and eventually Title 32 orders. We were needed by our state to assist in wide-spread testing for COVID-19.

I ended up on the second team our state stood up and it was comprised of 26 members. The state eventually stood up nine teams to rove the state to accomplish testing. Many missions for state active duty or Title 32 often do not involve the medical group, but this was a medically based mission, and we were thrilled to be able to help. Nebraska is one of a number of states that has a CERFP (Chemical, Biological, Radiological, Nuclear Enhanced Response Force Package) mission as the largest part of the 155th MDG. Other aspects of CERFP teams include decontamination, search and extraction, and command & control. These teams train as Army/Air members fulfilling various roles and answering to a Joint Task Force (the first ever in Nebraska). In our case, portions of command and control and decontamination were provided by our NE Army National Guard to create joint field teams. The joint experience was enlightening and gave me a great appreciation for the Army’s good handle on decon, logistics, and movement. Like I stated before, as a dentist, we don’t typically get involved with these missions.

For me, I kind of hate to say it was fun, but even just some patient care was welcome. One woman, after being swabbed for the ten seconds, stated that it was like going to the dentist! “Well, Ma’am, funny you should say that,” was all I said. A nasal swab is certainly easier than an IA block, but the patient-provider experience is very real as some were incredibly nervous about having this done. I found myself coaching the patient the same as when administering anesthetic, as a little kindness and compassion goes a long way to calming their fears. I found out how uncomfortable the testing process is as I too got tested toward the end of the mission. Even though I am familiar with the anatomy, there is something unnatural about a cotton tip applicator being stuffed that far into the nasal passage. I must agree with a patient when she stated it feels like pool water getting up your nose. The burn is real.

Overall, Team 2 accomplished over 3000 tests while activated. We successfully worked with 4 different health departments at thirteen different testing sites to include a meat packing plant, four nursing homes, and several drive-through testing operations. I joked at one point that we have seen enough small-town maintenance sheds (which provided cover for drive-through testing) to last a lifetime. We always wore more than enough PPE, to include full PAPR masks and suits in the early days. We eventually moved away from such extreme measures to N95s, face shields and Tyvek suits. We became so efficient that when we had media-coverage, they couldn’t dawdle in getting the shots they needed because we could set up a testing site from arrival to first swab in less than 30 minutes. All in all, the Nebraska National Guard teams provided over 30% of the tests accomplished in the state. 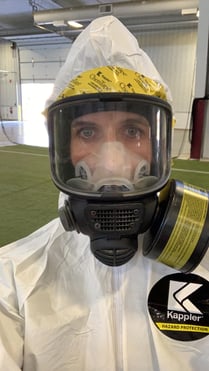 Exactly one year ago, I was deployed as the only dentist at Al Udeid Air Base in Qatar. This year, I was deployed within my own state. I have to say I much prefer being in the same time zone as my family. I also celebrated my seventeenth date of rank anniversary while on this deployment—eight of which have been with the Air National Guard. To witness the sense of purpose and patriotism while watching our team from various backgrounds meld into a well-oiled machine was such a pleasure. This experience, although potentially risky to our health, is one we will all certainly look back upon fondly. The numerous “thank-yous” from the Nebraska communities we served are thanks enough for a job well done.