Canadian researchers determined that 17% of implants had interproximal contact loss (ICL) that increased up to 29% by 8 or more years of follow-up. They published the findings from their cross-sectional retrospective study in the August issue of The Journal of Prosthetic Dentistry.

In setting out to conduct their study, the researchers found that, despite the potential for ICL between implants and adjacent teeth, few studies on the topic have been published. “A review in 2015 found only 5 articles on the topic of open proximal contacts but reported complications in a reported range of between 34% and 66% of implant-supported crowns, occurring most often at mesial sites and soon after restoration,” researchers wrote.

In addition, the researchers found in their study that ICL did not affect implant crestal bone level or marginal bone loss but tended to increase soft-tissue inflammation. “A chi-square test based on the number of open and closed contacts from each implant mucosal index score revealed a significant trend toward greater mucosal inflammation at implants with ICL, with a chi-square of 14.6 and P =.005,” the researchers wrote.

Their null hypothesis had been that ICL is not a function of time and that no difference would be found between implants that have ICL and those that do not.

Also, mandibular implants had more ICL (20%) than maxillary implants (15%). Researchers uncovered no difference between molar and premolar sites or male and female participants.

To conduct their study, researchers selected 4,325 implants that had potential proximal contact present between teeth and implants from an open cohort of 8,942 implants placed in private practice from March 1999 through January 2016.

The researchers cited the potential for missing data as limitations in their study. They also pointed out the risk of bias as a limitation, as the same clinician who placed implants evaluated and recorded all the sites.

Significantly, the researchers said their study found that open contacts increase with time and that use of a retainer and other treatment options to prevent ICL warrants further investigation.

“Technical complications after the definitive prosthesis insertion may lead to increased rates of repair and remakes, and the waste of chair side time and financial resources, and may even affect the patient’s quality of life,” researchers wrote.

The researchers found few studies assessing costs associated with IFCDPs and maintenance and limited data specifically related to technical implant complications linked with IFCDPs over a 5-year or more observation period. They declared that theirs (to their knowledge) is the first study to document technical complication and prosthesis survival rates of full-arch rehabilitation with moderately rough surface implants and IFCDPs by residents in a postgraduate prosthodontic clinic with supervision by experienced prosthodontists.

The researchers designed a retrospective clinical study with the primary purpose of reporting the technical complication and prosthesis survival rates with IFCDPs over a mean observation period of 5.2 years. Assessment of patient satisfaction and the effect of risk factors on the incidence of the most common technical complications were secondary outcomes.

Exclusion criteria included patients with less than 1 year since the placement of the definitive IFCDP, patients with machined-smooth surface implants, patients not signing the consent form, and pregnant patients.

The study included evaluation of a total of 71 IFCDPs in 52 patients whose average age was 65.5 years.

In organizing their study, the researchers created 2 observation timelines: 5 years and 10 years, with the definitive prosthesis placement as the baseline time. They separated the prostheses according to the type of material: ceramic was group 1 and metal-resin was group 2. The researchers defined technical complications that had affected the IFCDPs and divided them into minor and major categories.

After patients underwent a comprehensive, single-visit examination, they received a questionnaire with 5 yes or no questions regarding their general satisfaction with esthetics, ability to chew, taste, and speech.

Significantly, 91.6% prosthesis survival rate was achieved (65/71 IFCDPs) after a mean exposure of 5.2 years.

The researchers determined a need for more studies to ascertain financial burden of prosthetic maintenance of full-arch implant rehabilitation and that patients should be informed of the need to adhere to frequent maintenance that could cost them financially. “The clinical implications of the present retrospective study pertain to the high implant survival rates achieved during full arch rehabilitation with IFCDPs after a long-term follow-up,” researchers wrote. “However, only 58.28% of the IFCDPs were free of complications at 5-years and this indicates a very high maintenance load for either form of prosthesis at face value.”

Editor’s note: An important goal in treatment planning is the alignment of patients’ expectations with what is realistic clinically. This can be accomplished by modifying the planned procedure to something more aligned with the patient’s risk tolerance or by educating the patient to accept the actual risks involved. Sometimes the gap between actual risks and a patient’s perception is narrow, and a simple explanation is all that is required. Other times patient’s expectations are not consistent with scientific evidence, and a more involved discussion is necessary. Based on Papaspyridakos and colleagues’1 study, it appears we need to be doing much more to educate patients about the risks of experiencing technical complications associated with an implant-supported fixed complete denture prostheses (IFCDP).

Maintenance needs do not become the patient’s responsibility until the clinician has fully explained and educated the patient on what to expect. It is our job to align patients’ expectations with what the scientific evidence shows, and in the area of IFCDPs, we need to do more.

In a retrospective study, researchers found low incidence of misfit in immediately-loaded complete-arch fixed implant-supported prostheses (CAFIP), but determined that misfit may be an important factor in the survival of the conversion prostheses. They published their findings in the October issue of Journal of Prosthodontics.

“Though passive fit has been hard to define by the dental community, it is generally accepted that absence of misfit should be a clinical goal during prosthodontic treatment,” researchers wrote. “Passive fit is thought to reduce unnecessary biomechanical strain at the implant to prosthesis interface and minimize biomechanical complications.”

The researchers report finding no literature that examined clinical outcomes of uncorrected misfit in the immediate load scenario. They designed a retrospective study to determine if an uncorrected radiographically detected misfit in an immediately-loaded CAFIP significantly affected early implant or prosthesis survival rates.

The inclusion criteria were treatments in which an interim CAFIP was immediately loaded in 1 or both jaws; the availability of an immediate postoperative panoramic radiograph as well as follow-up radiographs after placement of the definitive prosthesis; a clearly recognizable vertical radiographic misfit on at least 1 of the supporting implants at implant, abutment, or prosthesis level; and clearly deducible chart notes with all data related to implants and prosthesis.

The exclusion criteria were conversion prostheses that were not immediately loaded, panoramic radiographs that showed no detectable misfit, images with poor resolution or undiagnostic quality, and images with partially edentulous rehabilitation.

“From the results of the study, it can be suggested that radiographically detected misfit may not play a detrimental role in early implant survival, as long as adequate primary stability is achieved at the time of surgery,” researchers wrote.

The researchers added that if the cross-arch splinting effect is achieved with an intact interim CAFIP of sufficient thickness, the effect of misfit on implant failure may be minimal. Misfit, however, they wrote, could result in fracture of the interim all-acrylic resin CAFIP.

Researchers determined the overall prevalence of radiographic misfit in the study was low at 2.4%, and its relationship to early implant failure deemed insignificant. They declared that the low incidence is a clinically favorable finding of their study. 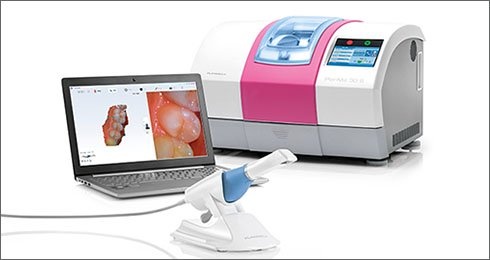 Planmeca FIT is a complete CAD/CAM solution allowing clinicians to offer same-day dentistry. This system includes Planmeca Emerald S high-speed intraoral scanner and laptop, Romexis PlanCAD Easy design software, and our Planmeca PlanMill 30 S for precision milling. We also include exceptional training and support. It starts with a 2-day course held in our state-of-the-art training facility followed by an onsite integration day, 6 live webinar training sessions, and access to our training library. You’ll also enjoy 5 years of unlimited clinical and technical support. The complete Planmeca FIT system is under $100,000, up to $50,000 less than other systems.

Learn the possible complications or failures you may encounter with fixed prosthodontics so you can prevent them happening — or at least minimize any damage by taking the course Clinical Complications in Fixed Prosthodontics: Causes, Prevention, and Management, Parts 1-5. These CE courses are designed to help you understand the different types of fixed prosthodontics and their common complications, as well as how to prevent caries, the benefits of all-ceramic crowns, and more. This 5-part series will give you the confidence to treat these tricky situations and improve your patient’s oral health.

Visit ADACEOnline.org to find out more information about these and other prosthodontics courses.

Registration is now open for the American College of Prosthodontists Digital Dentistry Symposium in Chicago, Feb. 18-19, 2020. “Solutions and Strategies for Success” will focus on practice integration and digital workflows to help dental professionals achieve accurate, efficient, and exceptional patient outcomes with advanced dental technology. Hands-on workshops will be available. Register at Prosthodontics.org.